Argentina’s capital is one of the world’s greatest cities and a thrill to visit any time of the year. Having lived in Buenos Aires for 5 years and visited on numerous occasions apart from this, I’ve seen how the city changes every month. Here’s my guide to the best times to visit.

What many people don’t realise is that the climate of Buenos Aires is similar to that of Barcelona or Rome. Hot, humid summers with cold, damp winters.

The city is located by the Southern Atlantic Ocean, so even on the driest days, there’s a hint of moisture that can make things feel even cooler.

The city is a long way from the ski fields of Bariloche and Mendoza so it’s unlikely that anyone spending considerable amounts of time in the city in July (the coldest month) is using the city as a base for skiing. It’s not cheap to fly internally in Argentina so the previously mentioned cities are better bases if you’re into winter sports.

Tango, one of the biggest tourist draws, is a little more comfortable in the colder months (for dancers, at least). If you’ve danced close-embrace style with a partner in a hot, non-airconditioned old building in January, you’ll know what it means to sweat in Buenos Aires. The city gets unbearably hot before storms and your tango partner and you will end up drenched in sweat in no time. Of course, this is how it’s been for web over a hundred years. While most places rely on a fan to cool the tangueros, there are some milongas with air conditioning.

The Buenos Aires International Tango Festival and World Cup takes place in August, benefiting from cooler temperatures for the dancers.

Every month sees a number of festivals and the people of Buenos Aires just love events. If you put on a show, they will come. A social bunch, Porteños (Buenos Aires residents) will turn up to the opening of an envelope, but there will be plenty of wine or maté to toast the occasion.

If you hate the rain, go in June or July but don’t expect a lot of sunshine or heat in the air. If you want the absolute hottest weather, January is your best bet. The best months to get cheaper accommodation are September, which the most expensive months are December, January, and February.

June sees the lowest number of tourist arrivals while January is the busiest tourist month by far.

January is the month when people take holidays and escape the heat of the city. If you like the city a bit emptier, this might be the best month for you. However, the weather is always very hot, there are fewer people around and fewer businesses operate, and there’s a jaded air after the Christmas and New year celebrations. But this is also peak season for tourists. So while you can expect many of the places locals visit to be quieter, the touristic areas will be doing roaring trade. If hitting the beaches outside of the city is your thing, then this is a good month to do it.

The last week of February is also Buenos Aires Fashion Week for people interested in that kind of thing.

One of my favourite times of the year. The air has cooled a little and there’s a better buzz in the air. People are less tired from the heat of the summer and the city looks beautiful as leaves begin to turn brown. In April, the temperatures are noticeably cooler. The sun is still bright and hot during the midday but with shorter evenings, it’s time to get a sweater or jacket for going out. Blustery winds can pick up and make the air feel a lot colder. During these months the BAFICI international film festival takes place in Buenos Aires attracting movie fans and fans of independent cinema to the city. The 2020 event takes place from April 15 to 26.

In May, days start to get cloudier (you can expect almost half of all days to have cloud cover) and temperatures take a big dip. The Buenos Aires International Book Fair kicks off in late April but runs for a couple of weeks in May. This is Latin America’s biggest book fair and attracts authors and book nerds from all over the world. The 2020 event runs from April 30 to May 18, 2020

June is the month with the lowest rainfall but it can be gloomy and temperatures are already quite cold. You might not use raincoat that much but a warm jacket and hat might be useful for going out at night.

July and August can get bitterly cold in Buenos Aires. It rarely snows but it gets down to the low single digits (Celsius) and if the wind picks up you’ll need hats and gloves to stay warm. Humidity levels remain around 80%, leaving the city fairly dry at this time of year.

The official average temperature for July is highs of 15 C (59 F)and lows of 8 C (46 F), but this does not take into account sudden plunges in temperature, especially at night. Believe me, they happen frequently in the colder months. The lowest recorded temperature in the city is −5.4 °C (22.3 °F).

Storms at the end of August (Tormenta de Santa Rosa) can bring a lot of rain as winter changes to spring.

September is the beginning of the bloom of Jacaranda trees all over the city. This is a special time to visit as there’s a buzz in the air with the coming warmer weather. This is also one of the quests times in terms of tourism and the savvy traveller can bag some bargain accommodation and attractions. According to AirDNA, Airbnb rates are at one of the lowest during September.

La Noche de Los Museos (Night of the museums) is a one-day event when all the museums and galleries in the city open their doors for free. Even if you’re not interested in museums, it’s worth a look. Shows, food and free music events and transport make it a night for everyone.

Buenos Aires International Jazz Festival takes place in November and is one of the most popular festivals of the year, with non-jazz fans turning up for the events too. Indoor and outdoor concerts at over 20 venues around the city make the best of the warmer evenings. 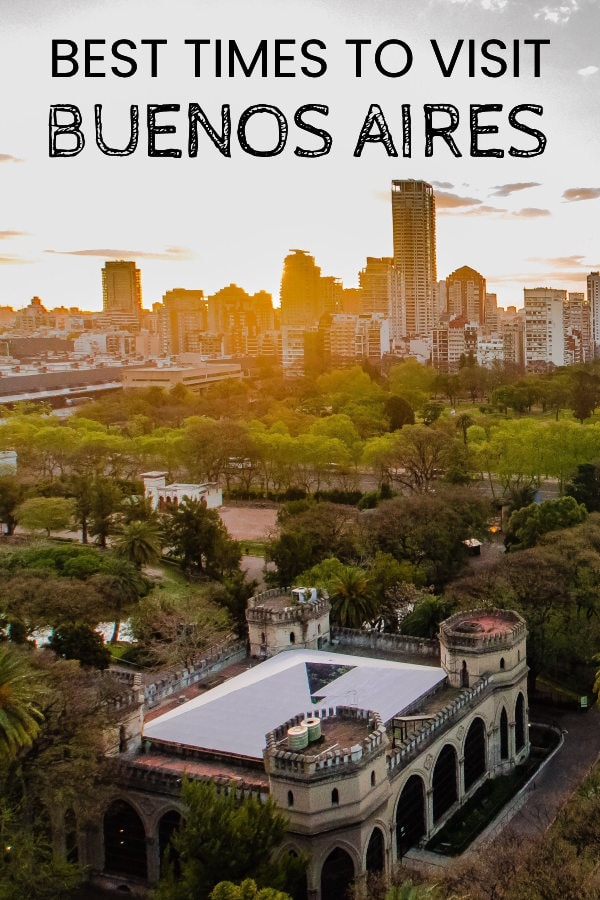 6 thoughts on “When’s The Best Time To Visit Buenos Aires?”