The definition of begpacker (beg-packer) is someone who attempts to save money by asking locals and other foreigners to fund their travels.

Actually, that’s my definition. The dictionary hasn’t arrived yet. But it will. is trending. And that’s a sad fact of modern travel. I don’t remember hearing about these people begging on the streets of third world countries before. I’m talking about the phenomenon of Westerners begging to avoid working a job in their own country.

If you’re starving and homeless, begging might be your only recourse, regardless of where you’re from and what your circumstances. But if you come from a western country with social welfare, you have an iPhone, and you can afford a flight home, you should not be holding up cardboard signs and begging for food or money.

Did the travel hacking and cheap flight movement create a sub-genre of dirt cheap travellers? Are we seeing the emergence of the minimum viable traveller (check out Minimum Viable Product if this makes no sense)? What about the Lean Startup Traveller? You know the ones. No idea what they’re doing, no plan, and definitely no cash to hand.

I enjoy travel hacking. I love getting stuff for free. But that doesn’t mean everything should be for free. If you can afford to buy a flight (often the equivalent of several months wages in many developing countries) then you don’t need to beg for food. I wonder if the travel hacking industry has played into the cult of begpacking.

One guy achieved internet notoriety (or at least Reddit fame) by travelling across the USA eating only out of dumpsters. Fair enough. It’s an interesting social experiment, and he wasn’t taking food out of the mouths of people that actually needed it.

Note: There’s even a beg packer SubReddit called /r/travelinghoboshaming/. Love the name. There’s no shortage of ranters on this topic but you have to search a few different subreddits to find everything people have to say about this travel movement. All of the comments paint the Western hobo lifestyle as despicable.

But begpacking in Asia (they all seem to be in South East Asia) is potentially redirecting funds from the local economy into the hands of those that need new iPhone batteries.

What’s going to happen when enough of these people pollute the streets of Bangkok and the local authorities start banning scruffy young travellers?

I used to be a young scruffy traveller. I wouldn’t have made it past customs. And that would be somewhat unfair as I wasn’t begging my way around the world. I paid my way. And I’m not taking a moral high ground. If daddy pays for your backpacking trip, then I’m happy for you.

If you’re rich and you want to travel, more power to you. But if your travel the world plans are funded by donations from passers-by on the streets of some poor country, know that you’re ruining it for everyone.

Images of backpackers sitting on street corners with signs in Thai and English frequently appear on social media channels. Is it a trend? Do lazy people see that it’s working and jump on this trend. Maybe these guys are influencers. 🤦‍♂️

Beg packing is trending and there’s always a temptation to jump on a trend for self-promotion.

The internet, and in particular, apps like Instagram and Snapchat encourage self-promotion like no other media in history. There’s a belief that those that shun social media are hiding something. So much so, that if you don’t have a Facebook or Linkedin Profile these days, companies looking to hire get suspicious.

The Thai government always stipulated that travellers have a certain amount of money to support their travels. The result is that travellers who look like they don’t have much money will be discriminated against. Backpackers will find it harder to enter the kingdom without a stash of cash on hand to show immigration officials. The figure is 20,000 Baht, which works out at around $600 USD. Not a huge amount, but not the kind of money you want to lose.

Despite having no money, he wants to continue travelling

I don’t know who the guy below is. Maybe he’s a nice guy. But does he not know that begin not the streets of Bangkok is illegal and takes money from people who need it. Okay, I get it. He lost his money.

But despite having no money, he wants to continue travelling. And we’re left to fund his trip. Even worse, he’ll accept money from Thai people.

He should go home and suck it up. We’re sorry your trip was cut short but start a GoFundme project or something like that. Maybe sell those sunglasses or your watch.

Big Leg – The Most Hated Westerner in Asia

In 2016 and 2017 the streets of Bangkok, Hong Kong, and a few other Asian cities witnessed a beg packer with a unique angle. Benjamin Holst has a medical condition that gives him an oversized leg, hence the nickname.
Internet famous, thanks to his women-chasing and partying exploits using donations from strangers, Holst was dubbed “The most hated German in Thailand” by Coconuts, the Asian news site.

After getting thrown out of several Asian countries, the boozing, womanising beggar took himself to Amsterdam for some upscale begging, before travelling to Africa, where found a wife. And lived happily ever after, I presume.

I don’t mind saving money on transport or accommodation so that I can have more experiences, or eat better food. But what I am against is people choosing to not save money, not earn money, not to accept their responsibilities, and apply psychological tactics to sucker money out of people that might not be able to afford it.

Begpackers make life difficult for budget travellers and poor people in the countries they “work”. This is not what travel is all about. Travel is about experiencing the world, embracing cultures, learning. It’s not about freeloading, preying not the good nature of other people, and ruining the travel dreams of genuine young backpackers with just enough funds to cover themselves.

Aspirant flâneur. Blogger, lifelong learner, entrepreneur & musician from Ireland. Travelling and living overseas for over 20 years. Avoiding office politics since ages ago. A work in progress.
Travel Blog Names: Why & How To Find A Great Brand Name
How Much Do Travel Bloggers Make?
Black Friday For Travel Bloggers: Best Deals 2019 [Includes Cyber Monday]
Gifts For Writers & Aspiring Travel Bloggers
The Best WordPress Travel Blog Themes
Why I Travel - Seeing The World Made Me a Better Me
Travel Blogging For Beginners - Getting Started Mini-Course
The Best Travel Podcasts [2020 Edition]

3 thoughts on “BegPackers And The Lure Of Funded Travel” 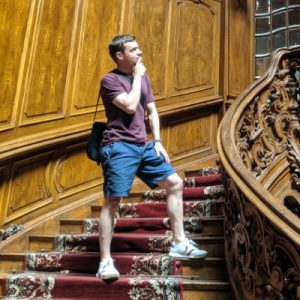